We're an affiliate We hope you love our content and recommended products! Just so you know, we may collect a share of sales or other compensation from the links on this page. Thank you if you use our links, we really appreciate it!

Most of Tollers love water and swimming is a great way to train your dog’s physical condition. However, not all dogs, even Nova Scotia Duck Tolling Retrievers or other water dog breeds, love swimming or water. Some people think that swimming is a skill that dogs naturally possess but that isn’t necessarily the case.

When it comes to swimming there are usually 3 categories of dogs:

Our dog was category 2 in this case. When our Nova Scotia Duck Tolling Retriever Stippy was young he was a bit afraid of the water and didn’t want to go in too deep let alone swim in it! He was about 9 months old when he learned to swim. On a summer evening after a hot day, we went for a walk with him near a lake to cool down.

The Nova Scotia Duck Tolling Retriever is one of many dog breeds (like the Labrador Retriever, Golden Retriever, Spanish Water Dock, Spaniel breeds, etc.) who generally love swimming and water. The Toller, and other Retriever breeds, are bred to retrieve waterfowl from the water, it’s in their genes, they love being in the water.

Some other breeds like Bulldogs, Dachshunds, and Boxers aren’t very good swimmers because of the way they are built with their short legs and low, sturdy bodies. Breeds that have short faces like the French Bulldog or Pug fatigue easily due to shortage of breath so they aren’t built for swimming either.

We live near the coast in the South of The Netherlands so our dog Stippy is a real beach dog! A cool dude who loves rolling in the sand, digging deep holes, chasing after his ball, playing with other dogs and of course swimming in the sea. Some people wonder if salty seawater is bad for their dog’s skin so read on for more info about that.

Is Seawater Bad for My Dog’s Skin?

No, Seawater is great for your dog to swim in. Saltwater has many benefits for your dog’s skin which is the same for us humans. The salt is a good remedy for skin infections or irritations because it dries the skin. Also, breeds like the Nova Scotia Duck Tolling Retriever (and other Retriever breeds, Spaniel breeds, etc.) are made for saltwater swimming.

Their coats contain natural oils that resist the absorbing saltwater which, if dogs don’t have these oily coats, can dry skin and make it flaky. The oily coat keeps their skin a bit moisturized as well.

Note: Double-coated dog breeds or breeds that have fine or silky fur can have some trouble with their skin (irritation) due to long exposure to saltwater which can result in irritation of the skin or dry, flaky skin. Always keep an eye on your dog’s wellbeing which includes his or her skin.

Playing, running, swimming, fetching a ball in seawater can be so much fun for your dog but be careful not to let your dog drink too much seawater. Your dog can get pretty sick from that. So if you are going to let your dog swim in the sea, bring a bottle of fresh drinking water. If you notice that your dog is thirsty, let your dog drink the fresh water. Does your dog keep drinking seawater? Get him or her out of the sea.

Dogs can get really sick from drinking too much saltwater, some have even died.

How do I Protect My Dog’s Skin from Saltwater?

So besides salty seawater, are there any other things to take into account or risks for your dog when he or she goes for a swim? Of course, swimming and playing in the water is so much fun and for most dogs, it doesn’t get any better but for you, as a dog owner, there are some risks you should be aware of and keep in mind every time you take your dog for a swim.

What Are The Risks of Swimming for a dog?

Dogs cannot estimate risks, they depend on you, their human, for their safety. Here you can read about the benefits and the possible risks in and around the water but first the positive side of swimming.

Benefits for your dog when swimming:

When is it not safe to let my dog swim?

If you want your dog to swim in a safe environment it is advisable to go to the sea or to a place where the bathing water is controlled by the government. Always check the signs or flags when you’re at the beach or public water to see if the swimming conditions are safe.

Besides safe swimming conditions as mentioned above, there are also other factors that can cause health problems for your dog such as unsafe swimming water due to algae or disease in the water. There are various causes of intoxication (poisoning) caused by drinking water. Some causes are mentioned here:

Blue algae are sometimes seen in both fresh and saltwater in the summer. Not all blue-green algae are toxic. Blue algae form a thick blue-green layer on the water.

The bacteria that cause this produce toxic substances that primarily affect the nervous system and liver. Humans and all kinds of animals can be poisoned as a result, such as dogs, cats but also birds, fish, and cattle. Drinking this water or swimming in it can cause symptoms of liver poisoning such as vomiting, diarrhea, weakness, shock, jaundice and even death.

Nerve poisons cause vibrations, slowness, seizures, difficulty breathing, blue-colored mucous membranes and eventually death. Usually, the poisoning is not that intense, but there is always a chance of liver damage. Less toxic blue-green algae will cause vomiting and diarrhea. This is usually treatable and the animals can fully recover.

Later, jaundice and weakness sometimes develop. In the case of jaundice, the damage is serious and the animal must be treated urgently by the vet.

Botulism is a disease caused by the Clostridium botulinum bacterium, which releases toxins (toxins) that can cause paralysis. This bacterium occurs at high temperatures (water temperature 20-25 degrees Celsius) and mainly victims (water) birds and fish. These cadavers can contain high amounts of toxins.

By eating these cadavers, dogs can become very seriously ill. The toxins (neurotoxins) end up in the water and the dogs can become infected while swimming. In addition, dogs can get sick from eating infected cadavers. Vomiting and diarrhea can occur immediately, but it can also only manifest themselves after a few days.

Botulism is characterized by paralysis, the dog develops muscle weakness and does not feel well. He will stop eating and swallowing becomes increasingly difficult; in the end, breathing will also become increasingly difficult because the respiratory muscles are paralyzing. The dog can die depending on the number of toxins absorbed.

The disease is caused by a globally occurring bacterium Leptospira. The bacterium enters stagnant water through the urine of an infected animal and then other animals can become infected when they swim in this water. Direct infection through contact with urine is also possible.

Dogs can transfer Leptospira through their urine to other dogs and people. After infection, dogs can become long-term carriers. They seem healthy, but without proper hygiene, pose a risk to families and other dogs.

In dogs, the symptoms range from no or very mild symptoms to a rapidly developing, deadly disease. In the ‘classic’, severe form, the following symptoms may occur gastrointestinal inflammation with vomiting and diarrhea (which may be bloody), jaundice (orange-yellow discoloration of the mucous membranes due to impaired liver function), severe dehydration, dark urine, and listlessness. Vaccinating your dog offers good protection against this disease.

Because seawater can be very cold it is possible that dogs get chilled even on a warm day when playing. In addition, saltwater can cause dehydration. The first symptoms after the intake of an excess of salt often concern the gastrointestinal tract. Salt has an irritating effect on the mucous membrane of the gastrointestinal tract, resulting in unwanted eating, vomiting, and diarrhea.

The gastrointestinal complaints can lead to dehydration, low blood sugar levels, and possibly even shock. Nervous system complaints may also arise: the dog becomes restless, irritable, and may even develop muscle twitching, seizures, or a greatly increased body temperature. Eventually, the dog can fall into a coma and die.

Important Note: If your dog gets sick, de-hydrated or suffers from hypothermia always consult your vet!

How do I Teach my Dog to Swim?

Unfortunately, dogs are sometimes unable or afraid to swim. You can tell if your dog is unable to swim if the dog struggles with the front legs as well as the hind legs, they also have to

make powerful propulsive movements. If your dog is able to swim but maybe a little bit afraid you can teach her or him to swim. Here are some easy tips for teaching your dog how to swim.

Important: Never, ever throw a dog into the water!!

Swimming and playing in the water is and will continue to be a wonderful experience for you and your dog. With this knowledge about possible risks and taking some precautions if needed you will always enjoy the cool, refreshing water together with your furry friend!

My name is Eline van Stiphout and I live in The Netherlands. Together with my husband Arthur and our sweet Nova Scotia Duck Tolling Retriever Stippy, the three of us love to travel and go on outdoor adventures.

Currently, I’m a professional, fully licensed dog walker since 2017. I gave up my stressful fulltime office job to follow my dream which is working and walking with dogs.

Fruits and Vegetables Dogs can Eat

Shopping for a Pet Lover or pet Professional, but not sure what to give them?

How does Pet Insurance work? 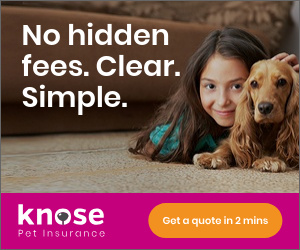